7 Inexpensive Ways to Staging a Home

Decorate with Pantone Colors of the Year 2016

Fixated to this year’s election coverage, it’s hard not to be fascinated by Donald Trump.The American business man and real estate mogul says “out loud” what nearly everybody thinks, but is too fearful or polite to actually say. Now, why I am by no means endorsing Mr. Trump, as a home stager I can understand the value behind the truth and the secret to his political success. 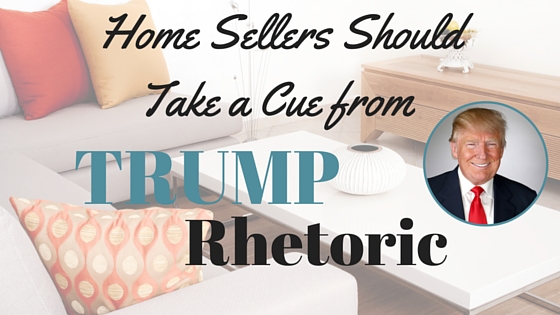 Like him or not, Mr. Trump continues to lead in the polls – winning the last three consecutive races as the Republican GOP Nominee heads into Super Tuesday. He’s made a name for himself, continues to dominate the media and seems to have a record-breaking number of people interested in the election. But, why? How is he doing this?

He’s not the most qualified, most conservative or even the most Republican, but he has seized on every opportunity that heads his way.

“Every day, you’ll have opportunities to take chances and to work outside your safety net. Sure, it’s a lot easier to stay in your comfort zone… in my case, business suits and real estate… but sometimes you have to take risks. When the risks pay off, that’s when you reap the biggest rewards.” ~ Donald Trump

As we already know Trump’s reward would be landing in the White House, (and although you may already live in a white house) a home seller’s reward is getting to the closing table. That final step where you hand over the keys in exchange for possibly one of the largest checks you’ll ever lay eyes on. Pause…think about what that would feel like for you, your family and for the other parties (buyer, real estate agents, home stager) involved. Creating a win-win situation though doesn’t happen in the last step, it happens at the beginning of the process– it’s a plan of action that follows these five elements (outlined in Stephen R. Covey’s The 7 Habits of Highly Effective People):

I would imagine Donald Trump followed a similar plan of action before entering the race and will continue to tweak his answers until the end of his campaign. This plan, these questions are used on our home staging projects, to not only get to know the seller, but to determine how serious they actually are. Our company works closely with sellers and real estate agents to educate them about the value of home staging and how this process will help you reach your desired results. Click here or watch the video below to learn more about the value of home staging.

Like Mr. Trump, it’s my job to confront the truth…the truth in people’s homes. Say those things that may not be polite, “you need to scrub your house clean,” or “you have too many family photos on display,” or “what’s that smell?” I think you get the point. If I don’t say these things who will? And I think Mr. Trump feels the same way about the future of America, even if he’s doing it in a bullying, bigotry way which brings us back to the question of why is he winning?

Some political experts say, it’s his celebrity status and business background, or he’s a master manipulator of the media. Others believe his worldview of good vs. evil may be playing a role or that he suggests he will be America’s savior and put her back on the path to greatness. And perhaps it’s his signature issues driving votes, but I think it’s much deeper than that. In fact, I believe the secret to his success is the same secret used in home staging: connecting with people on an emotional level. Most people react based on emotion, which are determined on past experiences.

Now while some say Donald Trump is feasting on frustrations and being a fear monger, those are valid emotions that American citizens are having. Many believe America’s unsafe now and since this feeling has happened under the regime of politicians, they’re looking for an outsider who can protect them. Mr. Trump also speaks of the good ole’ times, when America was great.   Many have spent the last decade unhappy, daydreaming of a better lifestyle something that Mr. Trump is flamboyantly dangling in our faces.

A home stager taps into those same emotions as well, maybe not fear and frustration, but when a home buyer walks into a staged home it’s important to make them feel that this home can protect them, that this space is a warm, welcoming and joyful place to live. It’s a place where the buyer will belong, feel loved and most importantly it’s a place where they’ll take pride in adopting a new lifestyle– a lifestyle they aspire to.

5 Home Makeover Secrets to Improve Your Space After COVID